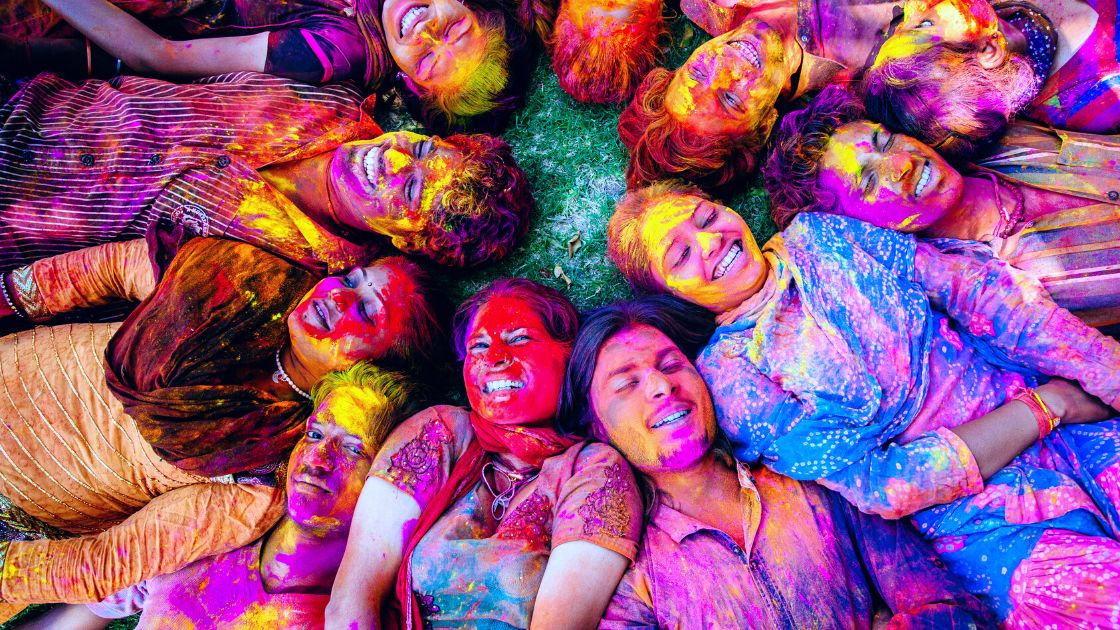 Holi, the Hindu festival of colours has been growing increasingly popular amongst Asians and non-Asians alike, all around the world. But why is Holi celebrated? And how is it celebrated?

Why Holi Is Celebrated

Holi starts with a bonfire night, on the evening before Holi itself.

This goes back to the story of Vishnu’s Narasimha avatar. Narasimha appeared to kill the asura (demon) Hiranyakshipu after the demon tried to kill his own son, Prahlad, for being a Vishnu devotee.

One of the ways he tried to do this was by getting his sister, Holika, who was wearing a fireproof shawl, to sit in a bonfire with Prahlad so that he would burn. Divine influence took the shawl from Holika and placed it on Prahlad, protecting him while Holika burned and perished.

The bonfire is a reminder of good’s victory over evil and marks a celebration of the fire that saved Prahlad and burned Holika.

So Why Does Holi Involve Throwing Colours?

The story behind this can be traced back to another of Vishnu’s avatars, Krishna.

As an infant, the demon Putana came disguised as a nurse and tried to breastfeed the baby Krishna poison. The demon was defeated, but some believe that the darker skin tone that Krishna is usually shown with, originated from him ingesting some poison.

As an adolescent, Krishna despairs because he believes that Radha and the other gopis will not like him because of his dark skin tone. His foster mother, Yashoda, tells him to approach Radha and colour her face any colour he wants.

And that is exactly what he does. If you didn’t already know, Radha and Krishna go on to share an epic, eternal love story.

The playful throwing of colours originated from this tale and that is how the modern custom of Holi emerged.

So next time you are playing Holi and throwing colours at each other, think back to the event you’re recreating!

What Are The Traditional Holi Colours?

Holi is during a change in season and the most traditional colours used have a medicinal effect to keep off germs and illness. This goes back to traditional ayurvedic practices as well.

Other traditional colours are:

Natural colours are not only better for the environment, but they are easier to clean and also provide a few medicinal benefits at the same time. That’s why I prefer them over synthetic colours!

« The Origin Of Murugan – The Boy Wonder