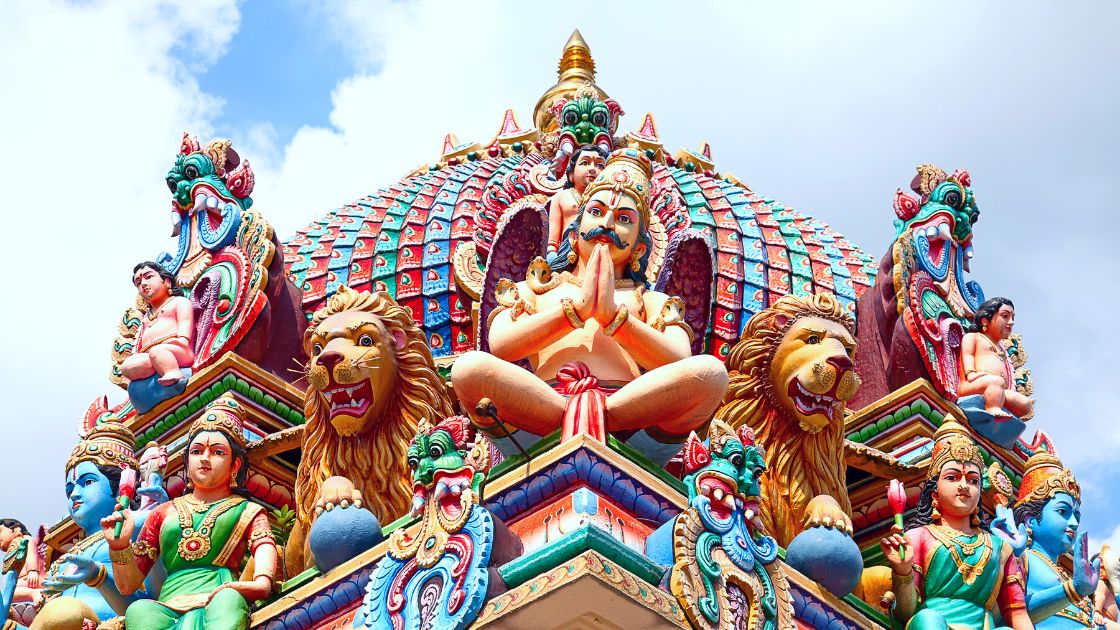 Vishwakarma, the god of architecture and engineering according to Hinduism, was one of the very early manifestations to appear of the supreme God, Prarbrahman.

True to his name, which translates to English as “All-accomplishing maker of all” he is thought to have been the architect that designed the universe.

As written in the Mahabharata:

The lord of the arts, executor of a thousand handicrafts, the carpenter of the gods, the most eminent of artisans, the fashioner of all ornaments … and a great and immortal god.

The term ‘Vishwakarma’ first appeared as a combination of the powers of Indra, Surya and Agni – the king of gods, the sun god and the fire god. And in the early Vedic period, it was believed that Vishwakarma, and not Brahma, had created the universe. At this time, he was thought of as an invisible force.

In the later Vedic period, this belief shifted into him having an invisible side, who was the creator and name giver of all other gods, and a visible side, Tvashtar, who created the heavens, the earth and the universe.

More recently, through the Upanishads and the Puranas, Brahma became known as creator of the universe and Vishwakarma became known as the architect and engineer of it, designing and building the devas’ palaces, and many of the ancient great cities on Earth.

Vishwakarma is usually shown sitting on a lotus or on a throne. Depending on the artist, he may be shown as an elderly male with a full beard and facial hair or a younger male.

He may also be shown as having one head or as having five heads. And also either four arms or eight arms, again depending on the artist.

As Vishwakarma was one of the very earliest deities of Hinduism, and for much of the time he was prominent, he was thought to be an invisible force, there is no standard or common way of portraying him in images.

What Did Vishwakarma Build?

Throughout the four yugas (or ages) of Hinduism, Vishwakarma is thought to have played a prominent role in architecture.

He designed and built Svarga Loka, the level of heaven where the Devas are believed to live and where good souls await reincarnation.

In terms of cities, one of the best known is Lanka or Sone Ki Lanka. Vishwakarma actually built it for Lord Shiva and Parvati to mark their wedding. Ravana, who would go on to become the demon king in the Ramayana, was invited to a housewarming ceremony and performed one of the important rituals.

As a thank you, Shiva told Ravana to ask for anything he wanted and overwhelmed with the beauty of the surroundings, asked for the palace itself and Lord Shiva happily obliged.

He also built Dwarka for Lord Krishna and this city would go on to become the foundation for Krishna’s own kingdom.

He also built the cities of Hastinapur for the Kauravs. He also built Indraprastha for the Pandavs and made the floors and ponds so smooth that it was hard for anyone to tell them apart.

When Duryodhan from the Kauravs visited the Pandavs’ palace, he was confused by this and slipped into a pond. The Pandavs’ wife Draupadi saw this and laughed. She commented that “a blind man’s son is also blind,” referring to the fact that Duryodhan’s father Dhritrashtra was also blind.

Duryodhan was furious with this and would later take revenge, and this one seemingly small incident would become a major cause in the epic great war between the two sides, the Mahabharata.

There are two main days that celebrate Vishwakarma:

This translates as “the day the five rishis became one”. As an immortal, many believe Vishwakarma did not have a birthday but that there was a day that his five children and five rishis (sages) all came together to celebrate and praise their father.

This day is marked by most industries, businesses and trades, and usually falls on 16 or 17 September of the Western calendar.

As well as marking Vishwakarma’s birthday, it also marks a day in history that the Vishwakarma caste of people invented the plough, which merged industry, design and agriculture together and was a landmark point in humanity.

Is Buddha A Vishnu Avatar? »