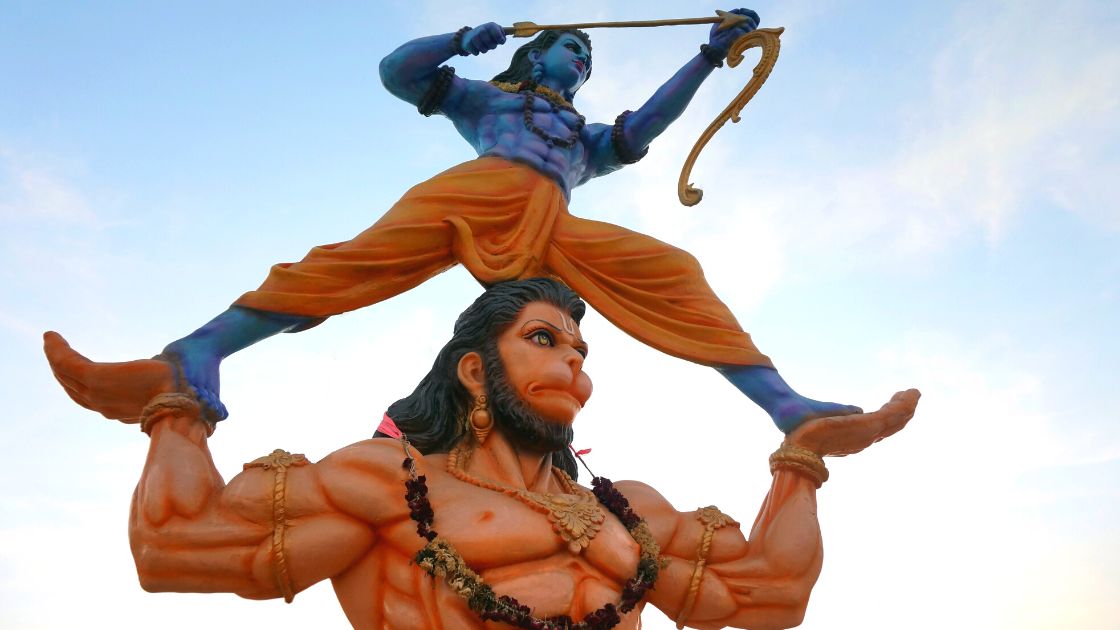 Possibly one of the best-known Hindu deities, it is difficult to summarise the role of Rama and the epic Ramayana in just one article, but I will do my best! So here is my Ramayana summary!

The Story of the Ramayana

The story of the Ramayana starts in the heavens. Mother Earth, Bhumidevi, was fearful of the evil rulers who were plundering the planet, including Raavan, ruler of Lanka. She appealed to Brahma the creator for help. Raavan, through deep penance, had been granted several boons and had grown incredibly powerful.

Brahma, Bhumidevi and the other devas appealed to Vishnu the preserver for their help. He promised to incarnate on earth as a man and kill Raavan. Vishnu was born as Rama to King Dasharatha. His companion, Shesha or Shesh Naag took birth as Lakshman. His consort Laxmi took the form of Sita.

That lays the foundation for this epic story, so let us begin.

King Dasharatha had 3 queens – Kaushalya, Kaikeyi and Sumitra, however, he remained childless. He held a great pooja to pray for a child. During the pooja, Kaushalya and Kaikeyi were both given holy prasad to eat but none was left for Sumitra. So they both divided their share in half and each gave Sumitra half of their portion.

All 4 sons were raised as princes, and Rama and Lakshman showed particular skill in archery. When Rama was 16, the sage Vishwamitra came to Dasharath for help fighting off demons who had been troubling him and stopping him from completing his pooja ceremonies. He selected Rama and Lakshman to aid him in his battle against the demons.

The king of Mithila, Janaka, found an infant girl in one of his fields one day, deep in the furrow made by one of his ploughs. Overcome with joy, he celebrated this miracle of god, and adopted the child as his daughter, naming her Sita.

King Janaka held a swayamvara (an ancient ceremony where the bride chooses her husband from several suitors) for Sita when she was of marriageable age and Vishwamitra took Rama and Lakshman for this.

King Janaka owned an extremely heavy bow, presented as a gift to him by Lord Shiva. Whoever could pick up the bow, string it and wield it would be eligible to marry Sita. No other suitor could even move the bow but when it was Rama’s turn, he picked it up with ease and when he was stringing it, he happened to snap it into two.

Rama married Sita afterwards, and his brothers Bharat, Lakshman and Shatrughan married the other daughters of King Janaka – Mandavi, Urmila and Shrutakirti respectively.

Rama and Sita lived happily together in Ayodhya for 12 years after their marriage, and an aging Dasharatha named Rama as the crown prince and heir to the throne.

In the meantime, Kaikeyi’s mind had been slowly poisoned by her maid Manthara and she was worried about what would happen to Bharat if Rama was king. Manthara filled her mind with fear and Kaikeyi called upon two boons that Dasharatha had promised her when she once saved his life.

Kaikeyi demanded that Rama be exiled to the forest for 14 years while Bharat was made king. Bound by the boons he had granted, Dasharatha had no choice. Rama accepted his father’s decision without hesitation and went into exile with Sita. Lakshman chose to accompany them.

Soon after, Dasharatha passed away out of grief.

Bharat had been away and when he returned and found out what was happening, he pleaded with Rama to not go. Rama was loyal to his father’s word however and Bharat could not convince him to change his mind.

Instead, he asked for Rama’s footwear. While Rama was in exile, he would keep his footwear on the throne and ruled as Rama’s regent. rather than as king.

While in the forest, Raavan’s sister, Surpanakha comes across Rama and Lakshman and tried to seduce them but fails. As revenge, she tried to kill Sita but Lakshman stops her by cutting off her nose and ears.

When news of this reaches Raavan, he is furious and vows revenge by kidnapping Sita, with the help of the demon Maricha. Maricha took the form of a golden deer and when Sita saw the deer, she urged Rama to capture it. Rama went after the deer and Lakshman stayed and protected Sita.

Shortly afterwards, both heard what sounded like Rama calling for Lakshman’s help. Sita became hysterical and sent Lakshman to help him. While on her own, Raavan appeared in the form of an elderly ascetic and asked Sita for help. When Sita tried to help him, Raavan took on his true form and carried her away.

The humanoid vulture, Jayatu, saw this and tried to help her but was mortally wounded. He was however able to convey what happened to the grief-stricken brothers and direct them to Hanuman and Sugriva in Kishkindha.

Help From The Vanaras

On their search for Sita, Rama and Lakshman meet Hanuman and Sugriva. Sugriva, the deposed ruler of the vanara kingdom of Kishkindha asks for the brothers’ help to regain his throne and they duly oblige, by helping kill Vali, who was Sugriva’s elder brother. Indebted to Rama and Lakshman, the new king orders search parties to help find the kidnapped Sita.

Hanuman takes on a gargantuan form and visits the kingdom of Lanka. As a side note, Hanuman’s time in Lanka is described in great detail in the powerful Sundara Kandh prayer.

Hanuman finds Sita in the gardens of the palace and offers to take her home. Sita however refuses to be touched by another man and insists Rama must come to save her and avenge the insult of her kidnapping.

Before leaving, Hanuman begins to destroy Lanka before allowing himself to be captured. When captured, he is able to confront Raavan and urge him to let Sita go. Raavan of course doesn’t listen. Hanuman has his tail set on fire but then escapes his bonds and before leaving, sets the city on fire.

The Battle Of Lanka

Rama, Lakshman, Hanuman, Sugriva and their army cross over to Lanka after constructing the Rama Setu bridge from South India into Lanka. The battle that ensues is epic but ultimately results in Rama killing Raavan. Raavan is often depicted as having multiple heads so beheading him wouldn’t kill him. Rama specifically had to aim an arrow at his heart instead.

Raavan’s brother Vibhishan is installed as king of Lanka.

What happened next differs depending on whether you follow Valmiki’s Ramayana or the popular cultural version. In both cases, Sita undergoes the fire test (agni pariksha) but the circumstances are very different.

In Valmiki’s Ramayana, Rama insists that he will not take Sita back as she has been the property of another man. Sita responds by explaining her divine birth and then a pyre appears. She walks through the newly formed flames to prove her purity.

In popular culture, and what Tulsidas wrote in his version of Ramayana, Rama asks Sita to undergo the agni pariksha to put down the doubts of other people and stop rumours from growing about her purity. Sita was protected by Agni, the god of fire so when she stepped into the fire, he lifted her out and placed her on the throne to show her purity.

Once this is over, Rama, Sita and Lakshman complete their exile time without much incident and return to Ayodhya. This is often cited as one of the many reasons why Diwali is celebrated.

The story takes another turn when Rama banishes Sita and she gives birth to Luv and Kush but we will save that for another day.

Lingaraj Temple – One of the Finest “Purely Hindu” temples »