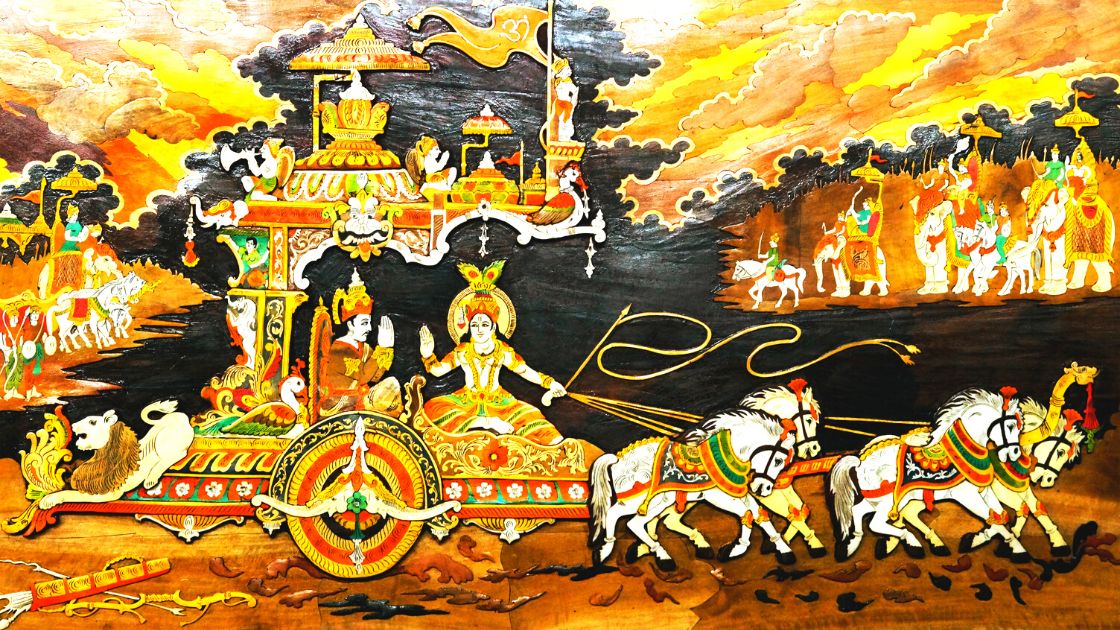 The Bhagavad Gita (भगवद् गीता) is a sacred text in Hinduism that is part of the Mahabharata.

The script is set as a dialogue between the Pandava prince Arjun and Lord Krishna. On the battlefield, on the brink of war against the Kauravs, Arjuna is facing a dilemma about fighting his cousins and Lord Krishna must urge him to fulfil his role in the world.

What follows is one of the greatest philosophical works in the history of mankind.

What others have said about the Bhagavad Gita in English

“In the morning I bathe my intellect in the stupendous and cosmogonal philosophy of the Bhagavad-Gita, in comparison with which our modern world and its literature seem puny and trivial.”

“The Bhagavad-Gita is the most systematic statement of spiritual evolution of endowing value to mankind. It is one of the clearest and comprehensive summaries of perennial philosophy ever revealed; hence its enduring value is subject not only to India but to all of humanity.”

“In order to approach a creation as sublime as the Bhagavad-Gita with full understanding it is necessary to attune our soul to it.”

To really understand the true meaning and depth of the Bhagavad Gita can take years of continuous and consistent study and discipline. Not everyone is a scholar who can devote that much time to attempting this endeavour.

But there are plenty of smaller pieces you can take in, understand and apply to your everyday life as wise words to live by. Here are just some of the best ones:

“It is better to live your own destiny imperfectly than to live an imitation of somebody else’s life with perfection.”

“The power of God is with you at all times; through the activities of mind, senses, breathing, and emotions; and is constantly doing all the work using you as a mere instrument.”

“No one who does good work will ever come to a bad end, either here or in the world to come”

So please do take some time to start looking into the Bhagavad Gita in English in more detail, let it guide you in times of difficulty and share with your friends and family the beauty of this written masterpiece.

Why Do Hindu Gods Have So Many Arms? »