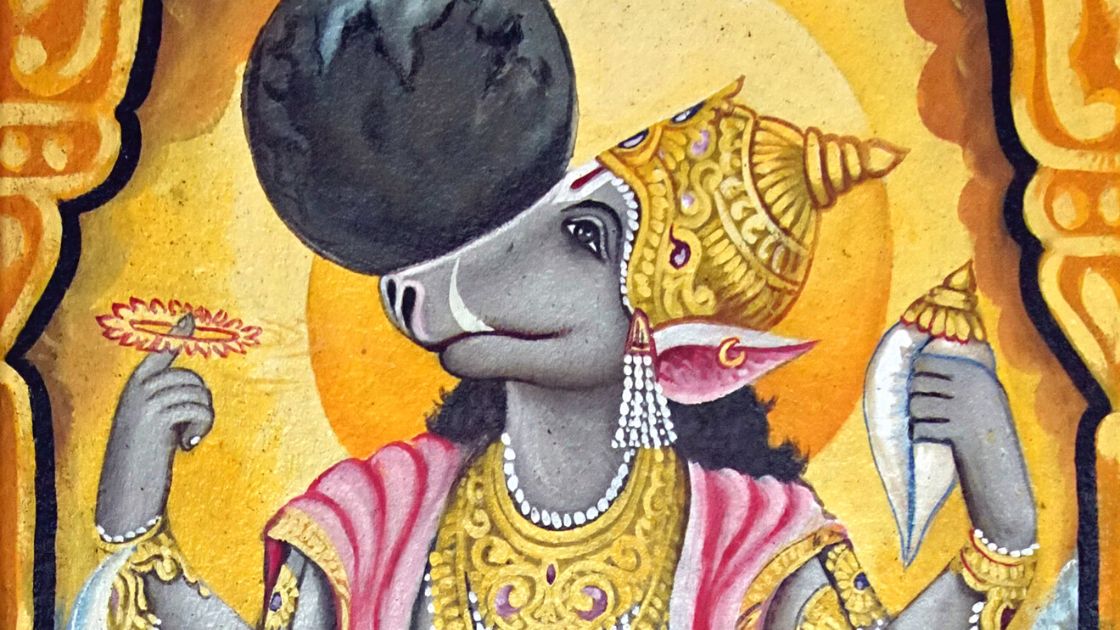 Varaha avatar is usually listed as Vishnu’s third avatar chronologically. Varaha took the form of a boar to rescue the Earth with his tusks, from the demon Hiranyaksha.

The depiction of Varaha’s avatar does vary depending on the artist’s own impression. Occasionally Varaha is depicted completely as a boar, and occasionally a boar’s head and a man’s body. The Earth, Bhudevi’s appearance can also vary – occasionally as a mass of land, occasionally in personified form as a young woman.

The Story Of Varaha Avatar

You need a bit of background information to understand the story of Varaha’s origination as well as the demon he slays.

Vishnu had two gatekeepers at Vaikunta, his residence, named Jaya and Vijaya. The gatekeepers were extremely serious about their job and didn’t want Vishnu’s time to be wasted.

One day four children approached the gates of Vaikunta, which had never happened before, and they demanded to see Vishnu as his devotees. The gatekeepers were both adamant about not letting children in to waste his time, so said he is resting and doesn’t wish to be disturbed.

The four “children” were actually the four great sages – Sanaka, Sanandana, Sanatana, and Sanatkumara – in disguise. They were deeply offended by the gatekeepers’ attitude and cursed them to become mortals and live on Earth.

Vishnu overheard the commotion and stepped out just as the gatekeepers were being cursed. The sages were unwilling to remove their curse and left.

Vishnu assured them that if they became his enemies, he would incarnate on earth and kill them each time, and ensure they attained moksha (eternal salvation).

At the same time, Earth was becoming more and more unstable and increasingly violent. As Hiranyaksha grew, he became hungry for power and prayed to Lord Brahma, the creator.

Lord Brahma appeared to him and granted him his wish that he could not be called by any man, God, or beast.

Powered by this boon, Hiranyaksha began to seize power on Earth and would engage in battle with anyone. He truly believed he was the most powerful being that ever lived and even the gods were powerless, thanks to Brahma’s boon.

The gods did regularly try to fight him and although they usually failed, it angered Hiranyaksha who decided he wanted to stop the gods from being able to access the earth altogether.

Using his strength, the demon shook the Earth off its axis and hid the earth deep within the primordial oceans.

Vishnu of course had been watching all of this unfold and realised the time was right to act. He needed to return the Earth to its correct place and then defeat the demon he had effectively created.

So he took the form of Varaha avatar, and dove deep into the oceans to regain the earth. Hiranyaksha watched this happen and challenged the boar to a fight.

Hiranyaksha chased the boar who was busy trying to get the Earth back. With the earth held on his tusks, Varaha turned to face the demon.

The two engaged in battle, but Hiranyaksha was barely able to even scratch Varaha. He had well and truly met his match.

They duelled until Hiranyaksha was at his weakest and the boar then killed Kiranyaksha. The demon’s boon was that he couldn’t be killed by man, god or beast.

Varaha, as an incarnation of Vishnu, and part man, part beast, was all three of them yet none of them at the same time!

Varaha emerged with the earth from the ocean and secured it back onto its axis.

And that is the story of Vishnu’s third incarnation, Varaha avatar.