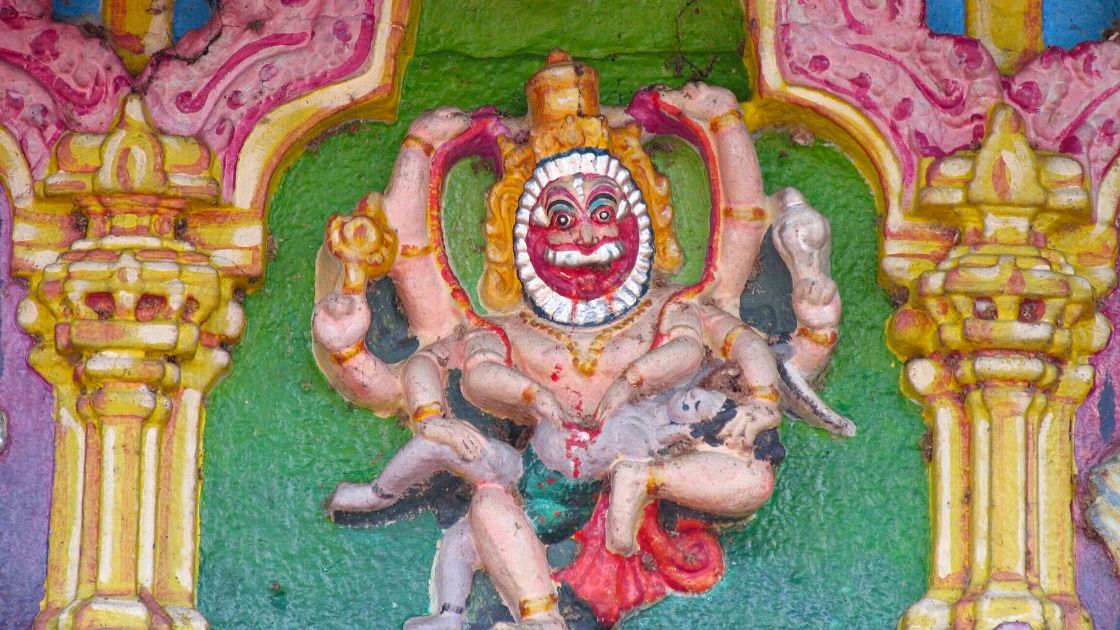 The story of Narasimha is actually a continuation of the story of Vishnu’s third avatar, Varaha.

As a brief recap, two of Vishnu’s gatekeepers, Jaya and Vijaya, were cursed with mortal life and while Vishnu was unable to reverse the curse, he offered them the chance to be reborn for 7 lives as his devotees or 3 times as his enemies. They opted for the latter. 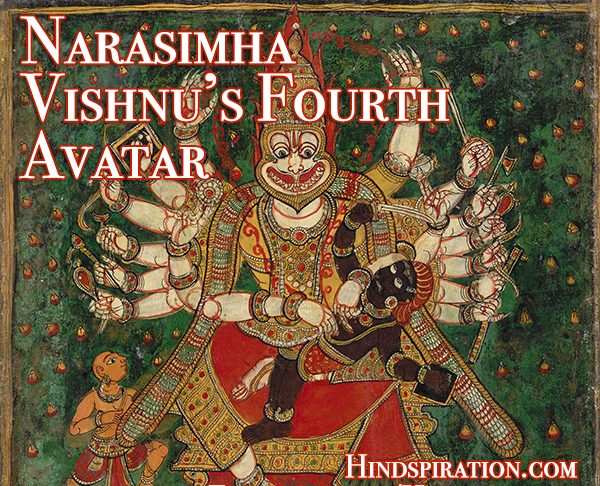 After the death of Hiranyaksha, Hiranyakshipu planned to lead a war against the gods and the mortals alike, purely out of revenge. He knew that he would end up opposing Vishnu so needed a boon to protect himself.

So he prayed to Brahma the creator for immortality.

During this time the demon was lost in meditation and forgot about his kingdom. Indra, the king of the heavens, saw this as an opportunity to attack Hiranyakshipu’s kingdom as a proactive measure, and he did so.

He was going to Hiranyakshipu’s wife prisoner to keep as a hostage for when Hiranyakshipu awoke from his penance, but Sage Narada intervened and for her own protection, took his wife to his own hermitage.

Eventually, Brahma appeared before Hiranyakshipu and the demon king asked for immortality, but Brahma couldn’t grant this wish as it was asking him to change the laws of nature.

Having learnt from his brother’s errors, Hiranyakshipu asked for a very carefully worded boon instead – to not be killed in the sky or on earth, at day or night, inside or outside, by any man, god animal or any other creature created by a god, and with no weapons.

Lord Brahma knew that when this boon was granted, Hiranyakshipu would completely disregard the life of others and become supremely powerful, but he had promised him a boon and couldn’t retract that vow.

And that suspicion was right.

Hiranyakshipu laid waste to Indraprastha, Indra’s residence, and no one had the strength or power to stand up to him.

Meanwhile, having given birth to a son named Prahlad while at Narada’s hermitage, Hiranyakshipu’s wife and son returned to him once his battle with the devas was over and repeatedly asked him to change his ways, but to no avail.

Having spent time under the guidance and tutelage of Sage Narada before returning to his father, Prahlad was the complete opposite – kind and caring for all living things. And he was a devotee of Vishnu.

This troubled Hiranyakshipu a lot, and he blamed Prahlad’s guru.

One day, Prahlad openly defied his guru and said Vishnu, not Hiranyakshipu, is the lord of the three worlds and the universes exist only because of him.

Out of fear of Hiranyakshipu’s wrath, the guru took Prahlad back to the royal palace and pointed out that Prahlad wouldn’t say where he learnt that from or change what he was saying.

Out of rage, Hiranyakshipu ordered his guards to kill his son. After some reluctance, they tried, but their blades shattered each time they tried to hit him. Hiranyakshipu turned to Plan B, to use venomous snakes, but the snake bits didn’t affect Prahlad either.

Getting even angrier, Hiranyakshipu ordered that his son be trampled by elephants, but the elephants were unwilling to harm him.

Finally, Hiranyakshipu’s sister, Holika, had been granted a boon that fire cannot affect her. So Hiranyakshipu ordered her to hold on to Prahlad while he lit them both on fire. The fire didn’t affect his son, but Holika started to burn for her sins and was reduced to ashes!

Now Hiranyakshipu was becoming a bit fearful, and even more agitated. He said to Prahlad “If you say your Vishnu is everywhere, where is he now?”

Pointing to a tree, “Is he behind that tree?”

Pointing to his throne, “Is he on my throne?”

Pointing at a pillar inside the palace, “Is he inside this pillar?”

To this, Prahlad responded, “Yes, he is everywhere.”

In anger, Hiranyakshipu smashed the pillar. As the shattered stone fell to the floor and the dust settled, a ferocious beast emerged with glowing red, furious eyes. Half man, half beast – the body of a man, face of a lion.

The beast then spoke loudly and angrily, “I am Narasimha, and I am here to kill you!”

Before Hiranyakshipu could even think, the beast had him in his claws. Narasimha dragged him to the threshold of the palace entrance so they were neither inside nor outside, placed him on his lap so he wasn’t on earth or in the sky, ripped Hiranyakshipu open with his claws so without any weapon, and this happened at twilight – neither day or night.

Prahlad took over as ruler of the demon kingdom and the demons prospered, as they changed their wicked ways under the rule of a Vishnu devotee.