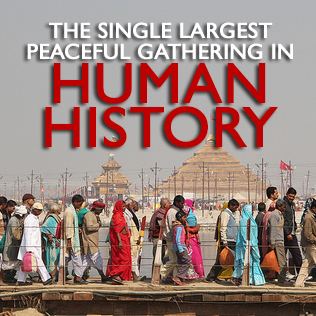 On 15 February 2013, around 30 million people gathered to bathe in the holy Ganges River in Allahabad, India.

It was the most auspicious day, Mauni Amavasya Snan, of the 2013 festival the Kumbh Mela.

There Are 4 Versions Of The Kumbh Mela

The mela takes place once every 3 years at one of 4 places – Allahabad, Haridwar, Ujjain and Nashik. This means that in each place it is once every 12 years.

There are 4 different versions of the Kumbh mela as well, with different time scales:

The 2013 mela was a Maha Kumbh Mela, the only one we will witness in our lifetime and for the next couple of generations.

The mela has been growing in popularity exponentially.

In recent times, 40 million are believed to have visited in 2001 over the mela’s 55 days. In 2007 the attendance was estimated at around 70 million people.

The 2013 version of the festival, the Maha Kumbh Mela in Allahabad is thought to have attracted over 100 million people!

The Kumbh Mela is believed to be the most sacred Hindu pilgrimage of all, and that is why it attracts millions upon millions of pilgrims, including holy men, devotees and many foreigners also join in. Usually extra rail and air services are required to manage the sheer volume of people in attendance.

The main bathing day, which is usually the busiest day of the festival, is called Mauni Amavasya Snan.

Another day of huge significance is Bhisma Ekadashi Snan, which is the day Bhishma Pithamaha, the most powerful of the Kuru dynasty (which the Kauravs belonged to) narrated the greatness of Lord Krishna to Yudishtra, the eldest of the 5 Pandav brothers.

Why Is Kumbh Mela Celebrated

According to Sharrell Cook from About.com, the Kumbh Mela is primarily celebrated to mark Samudra Manthan, the churning of the oceans.

Legend has it that the gods once lost their strength. In order to regain it, they agreed with the demons to churn the primordial ocean of milk for amrit (the nectar of immortality). This was to be shared equally between them. However, a fight broke out, which went on for 12 human years. During the battle, the celestial bird, Garuda, flew away with the Kumbh that held the nectar. Drops of nectar are believed to have fallen in the places that the Kumbh Mela is now held — Prayag (Allahabad), Haridwar, Nashik, and Ujjain.