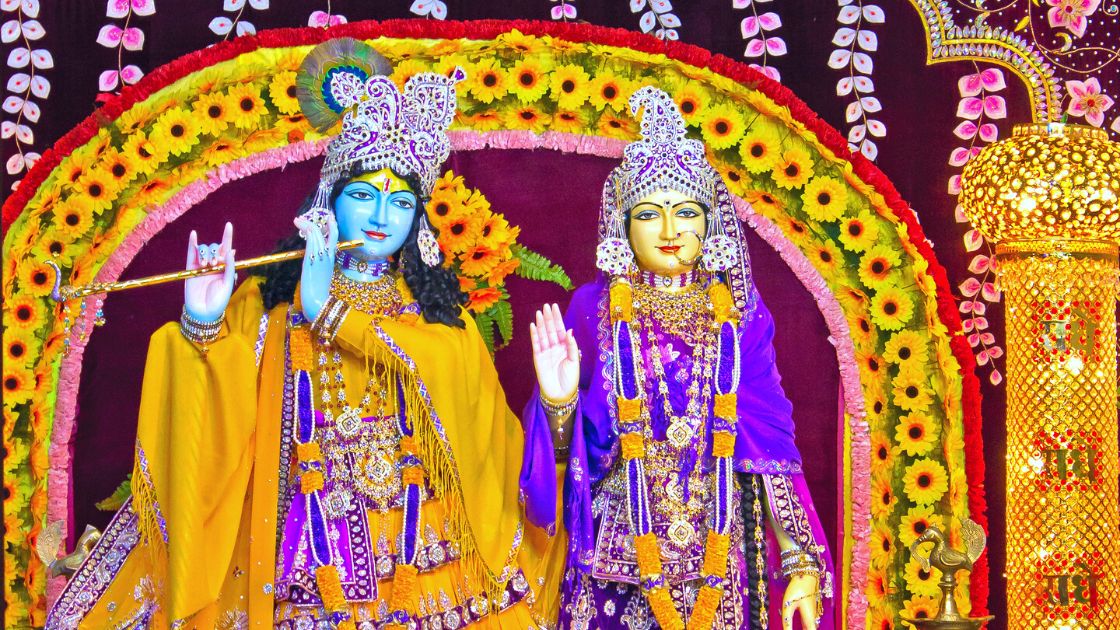 There is no way to fit the entirety of all the Shri Krishna Leela Stories into one single article. There is just so much to cover, so much to say, so much to learn from Lord Krishna’s time on Earth.

From birth in Mathura to an upbringing in Gokul and Vrindavan to establishing his own kingdom in Dwarka – then there is of course the epic of the Mahabharata and the Bhagavad Gita. And the story of how Krishna’s departure from this Earth started the dark age of Kalyug.

Then that is before we even start talking about the massive cultural impact of Shri Krishna, the celebration of Janamashtami, the spread of the Hare Krishna movement and so much more!

So for now we will keep things simple and focus on the Shri Krishna Leela Stories as simply and concisely as we can, and the rest will follow soon!

In the ancient kingdom of Mathura, Prince Kansa’s greed for power caused him to imprison his father and become king. His sister Devaki and her husband Vasudev were not harmed, however.

One night, a divine voice spoke to Kansa and warned him of a prophecy that Devaki’s eighth child would kill him and end his reign. Kansa reacted angrily and imprisoned Vasudev and Devaki and began killing each of their children. He killed the first six children as soon as they were born.

The seventh child was thought to be a miscarriage. However, the womb was transferred to Rohini, who was Vasudev’s first wife. This child was born and grew up to be Balram.

When the 8th child was born in the middle of the night, which happened to be Shri Krishna, the Gods allowed Vasudev to sneak out of prison with the child and carry him across the Yamuna River to Gokula, to his foster parents, Yashoda and Nanda in Gokul.

Shri Krishna would then grow into an adult with Yashoda and Nanda.

Nanda, Krishna’s foster father, was a cow herder and settled his family in Vrindavan. It is here that Krishna grew up as a mischievous child, a cow herder, and a protector of the people of Vrindavan and the eternal love story of Radha-Krishna was able to happen. The story of Radha-Krishna requires a lot more depth than this one article allows so we will come on to it separately.

These include Putana, who came as a nurse, Trinavarta who came as a tornado and Kaliya, the serpent. The iconic image of Krishna dancing on the hood of a multi-headed serpent is exactly what happens after Krishna defeats Kaliya.

Krishna once angered Indra, king of the Gods, by encouraging the people of Vrindavan to care for their animals and resources, rather than praying to Indra for protection. Indra unleashed a torrent of rain upon the village. Krishna lifted the nearby Govardhana Hill to protect the villagers from the rain, like an umbrella.

Once he had come of age, Krishna returned to Mathura to battle Kansa and free his birth parents.

Krishna returned to Mathura and fought Kansa one-on-one, ultimately defeating him. He re-instated his grandfather, Ugrasena, onto the throne and freed his parents.

He settled into the role of a leading prince in the court, and it was through this role that he became familiar with Arjun and his brothers, the Pandavs, of the Kuru kingdom.

When the time came, Krishna moved from Mathura to Dwarka (in modern-day Gujarat) and built his own kingdom there.

Krishna married Rukmini, by abducting her from her forced marriage to Shishupala. However, it is thought that Krishna had over 16,000 wives.

He rescued over 16,000 women from the demon Narakasura, and as these women were thought to be degraded, they were unable to marry. So Krishna is said to have married all of them to restore their honour.

Soon after, as tensions began brewing between the Pandavs and their cousins, the Kauravs, war became inevitable and what followed is to this day regarded as one of the greatest works of literature, not just in Hinduism, but for all humanity.

The Mahabharata and The Bhagavad Gita

Krishna had a role on both sides of the great war. He gave the Pandavs and the Kauravs each the option of having his army or having him but that he would not wield a weapon. The Kauravs chose his army and Arjun and the Pandavs chose him. Krishna took on the role of Arjun’s charioteer so he could be present on the field, but would not carry a weapon.

When both armies reached the battlefield, Arjun saw his cousins, grandparents and uncles on the opposing side and the thought of fighting and killing them filled him with fear and dread. How could he kill his loved ones?

This is when Krishna recited the Bhagavad Gita, and spoke about Dharma, Karma and doing what is right. He said it was just to battle the Kauravs due to their past evil deeds and to restore balance in the universe.

The Mahabharata and the Bhagavad Gita are both worthy of their own discussions, but for this article, you just need to know that the Pandavs were victorious and all 100 cousins on the Kauravs’ side were killed in battle.

Krishna visited the Kauravs’ mother, Gandhari, to offer his condolences however she held him partly responsible for not bringing the war to an end sooner and knowingly allowing her children to die. She cursed him that within 36 years, the Yadav clan, which Krishna hails from, would be no more.

Krishna, who believed his clan had become arrogant in recent times as well, agreed to this and said “Tathastu” (“So be it.).

Gandhari’s curse came true 36 years later. At a Yadav festival, a fight broke out and many of the Yadavs killed each other. Krishna’s elder brother, Balram, gave up his body with the power of yoga.

Krishna retired to the forest and meditated under a tree. A hunter, by the name of Jara, mistook the movement he could see through the bushes for that of a deer and fired an arrow in that direction, which pierced Krishna’s foot, wounding him.

When he realised his mistake, Jara begged for Krishna’s forgiveness. Krishna explained that in a past life, Jara was Vali, the monkey king who was killed by Vishnu’s 7th avatar of Rama and that he desired for this act to be made even so that Jara to not worry about this.

Krishna left the Earth after this event, and many believe it was this moment that marked the shift of the world from Dvapara Yuga to Kali Yuga.

« The Story Of Ardhanarishvara