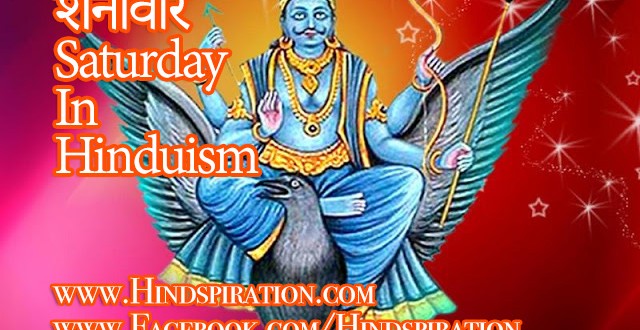 Saturday, also known as Shanivar in Hindi (शनिवार) is dedicated to Lord Shani (शनि). Shani refers to the planet Saturn. 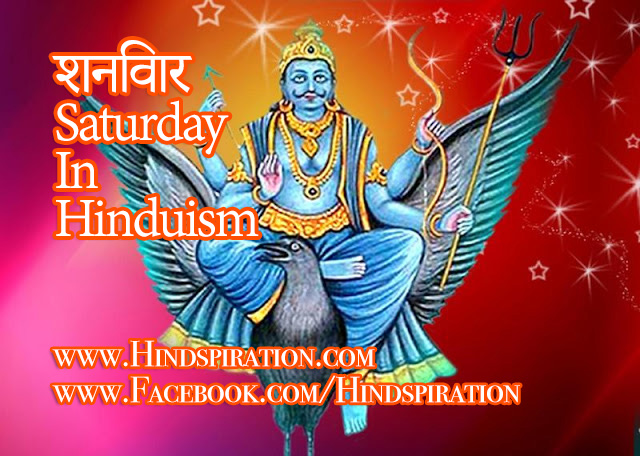 The Story Of Shani

Shani, is the son of Surya, the Hindu Sun god and brother of Yama, the Hindu god of death.

Shani is usually depicted as elderly, dark in colour, riding a vulture and with 4 arms. He is usually shown carrying a trident, bow, and arrow.

Legend has it that he was cursed by his wife. Since childhood, Shani was enamoured with Lord Krishna and spent much of his time with his mind drawn towards Krishna.

On one occasion, when he wouldn’t look at his wife because he was busy with his own thoughts, in a fit of rage she cursed him that his sight would become destructive and he would ruin anything he looks at. Therefore Shani is pretty much never shown to be looking forwards. Always looking up or looking down.

Misfortunes and curses are often attributed to Shanidev, so much so that when something unfortunate happens, it is often called ‘Shani-dasa’. This is actually misguided.

Importance Of Saturday In Hinduism

Many believe that it is inauspicious to start a new venture on a Saturday because it is Shani’s day and the day should be used to appease Shani and to protect yourself from the above curse.

But the fact is that Shani, as a dispenser of justice is completely impartial. In other words, if you do good, you have nothing to fear.

When Lord Hanuman burned Lanka to the ground in the Ramayana, it is believed he rescued Shani from Ravana’s clutches. As a result, Lord Shani promised no harm would be brought to Hanuman’s devotees. Therefore many people will pray to Lord Hanuman as a means of protection from Shani.

Although many temples feature the nine planetary deities, including Shani, there is only one single temple in the world dedicated entirely to Shani. This is located in Kuchanoor near Madurai and is called the Sri Shani Temple.