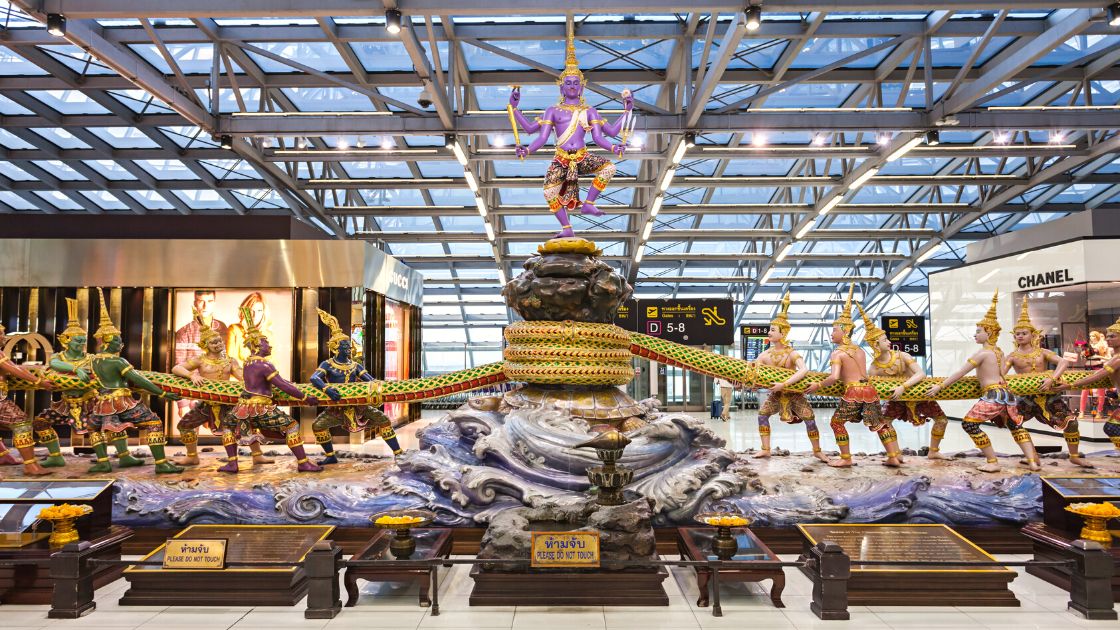 The full Samudra Manthan story begins with Indra, king of the devatas, being given a garland as a gift by the sage Durvasa. To show he wasn’t egotistical, he placed the garland on the trunk of his elephant.

The elephant let the garland slip from his trunk and trampled it. This enraged Durvasa, who cursed Indra and the rest of the devas to lose their strength, power and immortality.

When the demon (asura) king Bali discovered this, he led a charge against the devas to take over their domain and Indraprastha (heaven, Indra’s home) and the weakened Devas suffered heavy losses.

In desperation, Indra went to Lord Vishnu for help and was told that to gain their power back, the Devas would need to drink the nectar of ambrosia (amrita) which could only be obtained by churning the oceans. They would need to form an alliance with the demons to churn the oceans.

Lord Vishnu said that they would need to agree to share it with the demons once churned to get them to agree, but once obtained, he would ensure they aren’t able to drink any.

Indra approached king Bali and convinced him to work together to churn the oceans.

They lifted Mount Meru, a sacred mountain and abode of Lord Brahma into the ocean, and Lord Shiva’s serpent and king of serpents, Vasuki, was used as the churning rod.

The demons took the head of the serpent, and the devas took the tail end. When they started to pull forwards and back, they found that the mountain kept sinking.

It was then that Lord Vishnu took on his second incarnation, as Kurma the turtle, and carried the weight of the mountain on his back. Finally, the ocean could be churned.

The first thing to be released by the ocean was a poison known as “Kalakootam” which could contaminate the ocean. Lord Shiva intervened and drank the poison, which turned his neck blue. As a result, he is also known as Neelakanta (Blue-throat).

After this, the ocean released ratnas (gems) which vary in number depending on the text you read.

There were three valuables;

This list varies from Purana to Purana and is also slightly different in the epics, the Ramayana and Mahabharata. Lists are completed by adding the following Ratnas:[2]

Finally, after what is believed to have been a millennium, the heavenly physician Dhanvantari emerged with the amrita nectar. This resulted in intense fighting between both sides, trying to grasp the nectar.

Garuda, the mount of Lord Vishnu, grabbed the nectar and tried to fly away with it. During this flight, it is believed that four drops fell to Earth – at Ujjain, Haridwar, Prayag (Allahabad) and Nasik. These four places are where the Kumbh Mela is celebrated every 12 years.

However, the demons chased Garuda and eventually got hold of the pot of nectar. To get it back, Lord Vishnu took the form of Mohini and distracted the demons while they were busy fighting amongst themselves over who would drink it first.

As Mohini, he reclaimed the nectar and started distributing it amongst the Devas. One of the demons, Rahu, disguised himself as a Deva and started to drink the nectar as well. Surya, the sun god noticed this and alerted Vishnu, who proceeded to decapitate the demon.

Rahu’s head is thought to have lived on, separate from his body, due to the immortality effect of the nectar.

The rejuvenated Devas proceeded to claim back their abode and defeat the demons.

And that is the Samudra Manthan story.

There is a fantastic statue depicting this story at Bangkok Airport as well. 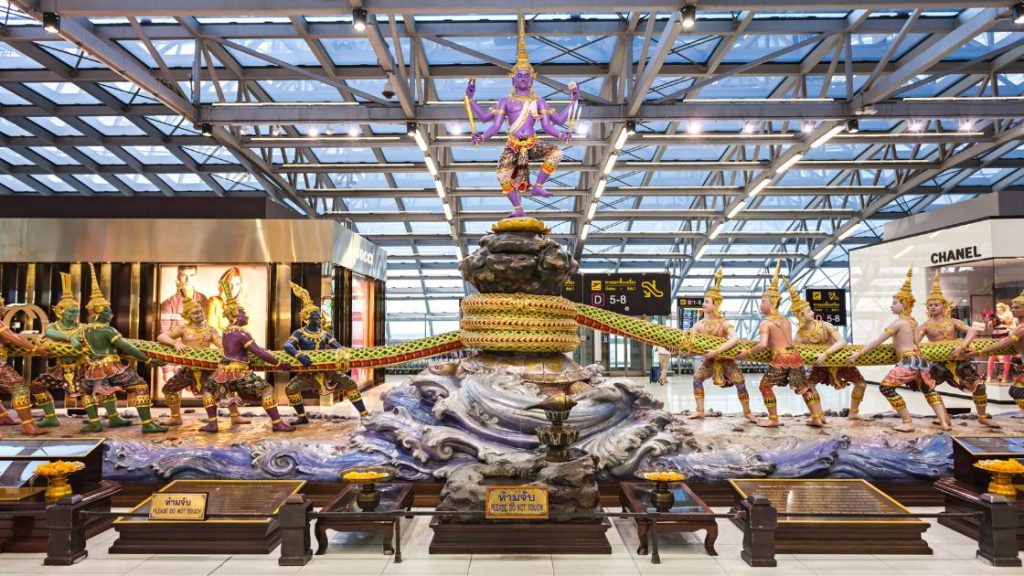 Lord Brahma Temple? There’s A Reason There Aren’t Many! »