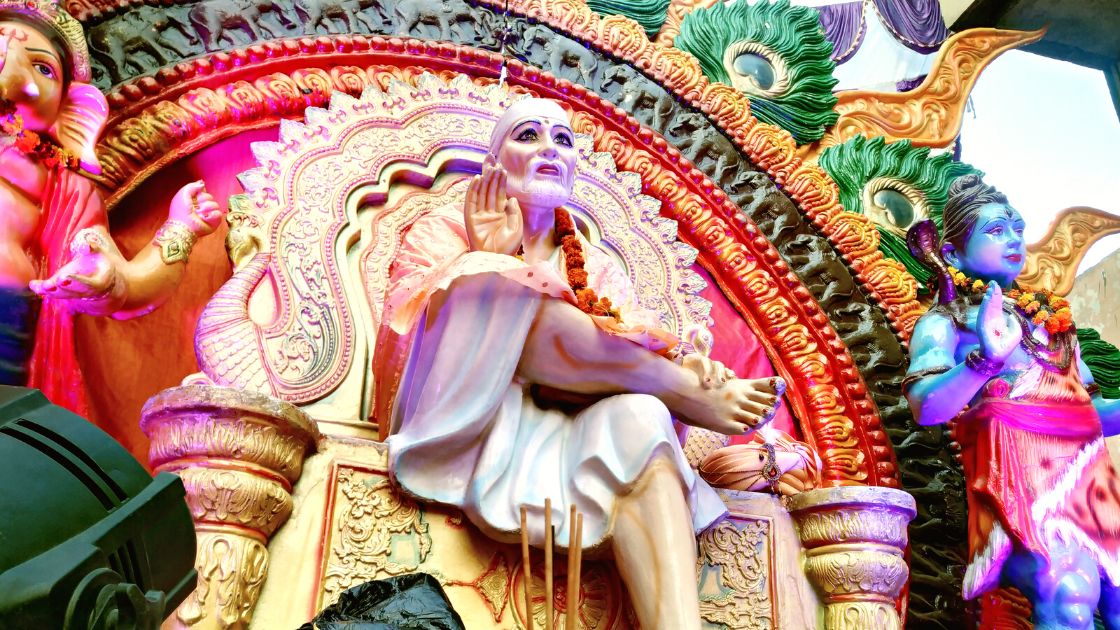 Sai Baba temple, Bhivpuri, also known as the Sainath temple is set amongst unremarkable surroundings and doesn’t really look like a temple of much great significance from the outside.

It is a short walk from Bhivpuri Road railway station, near Karjat in the Indian state of Maharashtra.

But for its modest appearance and surroundings, it is of HUGE importance. It is the first temple ever to be built that is dedicated to Shirdi Ke Sai Baba. It was built while he was still alive and even before a temple was built in Shirdi itself!

The story is actually a pretty remarkable tale of devotion and dedication.

It was founded by Sri Keshav Ramachandra Pradhan who used to be an atheist. Pradhan worked as a debt collector for a Parsi man in Mumbai but lived in Bhivpuri.

He accompanied a close friend on a pilgrimage to Shirdi, but at first wasn’t willing to go into the main mosque there for Aarti (yes aarti in a mosque, Sai Baba was a believer in the equality of all faiths). However, he could hear the deep chanting and the bells ringing and was pulled in without even realising.

Upon entering he sat in the back corner and went into a trance-like state of bliss. He had no realisation of anything around him apart from Baba sitting at the front of the room, and he was completely mesmerised.

After the aarti, everyone left and Baba called upon Pradhan. In his continued mesmerised state, Pradhan placed Rs. 2500 in Baba’s hand as a donation and left.

This was money he had collected for his employer and while he was returning to Bhivpuri in a horse-cart, he realised that not only had he thoughtlessly given away all of his employer’s money but he didn’t even have enough for the horse-cart.

He offered the cart owner his ring to sell and recover the fare, and any extra to be returned to him when suddenly a well-dressed man arrived. He enquired what was happening, paid for Pradhan’s expenses and left as quickly as he came, with no mention of who he was or where he came from.

To buy himself some time to try to recover the money he owed his employer, he told his employer he was too ill to work and needed some time off. His employer granted him this time off but also sent a message asking why he had been sent double the amount he was supposed to collect and asked what he should do with the extra money!

Pradhan immediately knew Baba must have had a part to play in this and became a very staunch devotee, as he was overwhelmed by Baba’s kindness and generosity.

He went to Shirdi regularly and always pleaded with Baba to come to Bhivpuri.

In 1916, Baba gave Pradhan a statue of himself and told him to return to Bhiwpuri and build a temple, and that Pradhan wouldn’t need to visit Shirdi anymore. Pradhan returned to Bhivpuri but didn’t follow Baba’s instructions and returned to Shirdi once more.

This time baba told him:

When I have come to your house, why have you come here? Bhivpuri is your Shirdi. Go there and do as I told you

So he built a small temple in Bhivpuri, in an area of beautiful greenery with a tree in the courtyard. The temple hasn’t been altered much since its original construction.

And that is how the world’s first temple dedicated to Shirdi Ke Sai Baba came into existence. The temple is still there in its original location. You should go see it!