To understand Lord Vishnu and his 10 avatars, you need to remember that he is known as the Preserver, protecting the world when evil threatens to overpower good.

Matsya is usually listed as the first Vishnu avatar to have taken form.

The story of Matsya starts with Brahma, who was entering a deep sleep at the end of the age of Satya Yuga. During this time a demon (asura) named Hayagriva stole the vedas to absorb their knowledge and hid deep in the ocean.

Vishnu saw this and knew he needed to intervene for the knowledge of the vedas to be passed on to the next age or Yuga.

At the same time, a king named Manu, a staunch devotee of Vishnu, was performing a thousand year penance. One morning when he went to the river where he normally does his prayers to and when he cupped water into his hands to pour over himself, a voice from his hands was pleading not to be put into the water.

It was a small fish, who said if he was put back in the water the other bigger fish would eat him. Manu, as a king and protector of those seeking his help, placed the small fish in a small jug he had with him, finished his rituals and went home.

The next morning, Manu could hear a voice from the small jug. When Manu opened the jug, a much larger fish was looking back at him and struggling to breather. Manu grabbed a large bowl, filled it with water and moved the fish into the bigger vessel.

As Manu was about to leave his palace to complete his morning prayers, a powerful voice called out to him. It was the same fish, but he had grown absolutely huge in size. Although shocked, Manu quickly grabbed the fish and took him to the river again and threw him into the water.

However the fish continued to grow and the king had to carry the fish to the ocean. Finally, when released into the ocean, did Vishnu appear as his true self.

Manu was overcome and fell to his knees.

Vishnu explained to Manu that the age of Satya Yuga was coming to an end with a huge flood in seven days and to create a large boat to take all plants, a male and female of every animal and the seven sages of the time.

Matsya then dove deep into the ocean to find Hayagriva. He found him guarding the Vedas and quickly attached him. The size and power of this fish completely overwhelmed the demon, who was quickly defeated.

Vishnu returned the vedas to Brahma, who was sleeping by now. 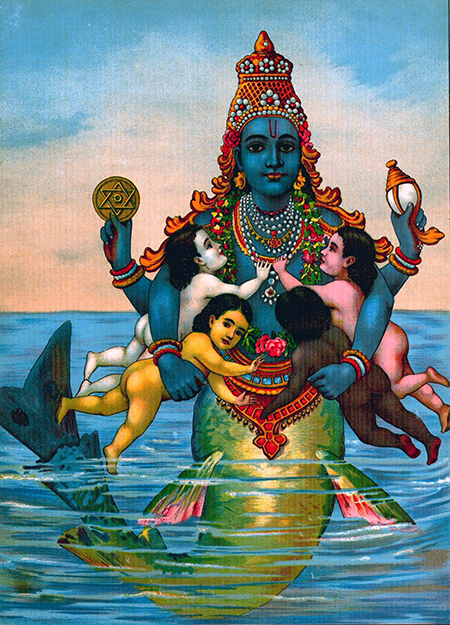 By the time the great flood finally came, Manu had completed his boat, collected the seven great sages, and all the plants and animals.

The deluge was torrential and violent and the boat was constantly close to capsizing, but Manu had faith that Vishnu was protecting him.

Matsya returned with the snake king Vasuki, and used the serpent to secure the boat to the fish to keep it afloat. During the remainder of the flood, Manu and those on board spent their time learning and reciting the vedas so that the knowledge could be carried over into the new age.

Once the storm calmed and the waters dried, the boat was grounded on the holy mountain, Mount Meru, and a new yuga (age) was ushered in.

This Man Quit His Job In A Luxury Hotel To Make A Difference To The World. Incredible.