Karwa Chauth is a festival marked mainly by Hindu women in Northern and North West India. It falls on the fourth day after the full moon in the month of Kartik on the Hindu calendar, which typically means between September and October on the Gregorian calendar. We are going to talk a little bit about the festival and how to do Karwa Chauth pooja too.

It is traditionally marked by married women for their husbands’ wellbeing, but unmarried women can join in as well.

The process for how to do Karwa Chauth pooja starts a few days before, when women will buy their shringar (adornments such as earring, sindoor, bindi, rings, mehndi and more) and traditional pooja items such as a karwa (clay pot), mehndi/henna, a thali (platter) and  diya (lamp).

On the day itself, women will wake up before sunrise to eat and drink. Particularly in Punjab an important part of this meal is sargi which is sent or given to a fasting woman by her mother-in-law.

At sunrise the fast begins, and women do not eat or drink anything during the day – not even water.

In the evening, a gathering is held for women to complete another part of the ceremonies for the day. This is called the fera ceremony. Women dress in fine clothing and jewellery and gather together. They sit in a circle with their pooja thalis (platters) and listen as a version of the Karwa Chauth story is narrated.

The main parts of this are listening to the Karwa Chauth story, a special mud pot (symbolic of lord Ganesha), a metal urn filled with water, flowers, idols of Gaur Mata and Parvati Mata and some fruits are offered to the gods by the participants.

It is customary for the story to be narrated with pauses and in each pause, the Karwa Chauth pooja song is sung and the thalis are passed around as you will see in the video below.

Once this ceremony is over, women wait for the moon to rise.

When the moon is visible, fasting women view it through a sieve or cloth, offer it water to secure its blessing and do the same towards their husband.

The husband then takes the thali and gives his wife her first sip and first morsel of food for the day. With the fast now broken, women can return to eating and drinking as normal.

Traditions and customs vary from region to region. 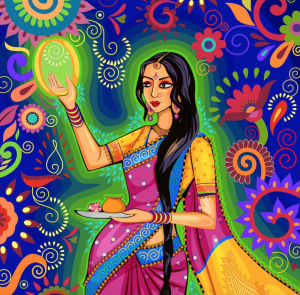 What Is The Karwa Chauth Story?

It varies from person to person and region to region but the most commonly narrated versions involve a queen named Veeravati, who kept a fast until moon rise to pray for her husband’s wellbeing and long life.

She suffered severe hunger and thirst and fainted. Her seven brothers couldn’t stand to see her in such a state and they tried to give an illusion that the moon had risen to encourage her to break her fast.

The stories differ in terms of how they did this – some say they used mirrors behind a pipal tree and others say they lit a large fire.

However Veeravati mistook the illusion for the moon and broke her fast. Shortly afterwards she received a message that her husband had died. She was inconsolable and wept throughout the night until a Goddess appeared (and again, stories differ as to which goddess is said to have appeared) and informed her that her fast was broken early.

There are a lot of different versions of how the story continues from here:

There are literally dozens of versions and variations of the story so we do leave it to you to choose which version you choose to believe in and follow. 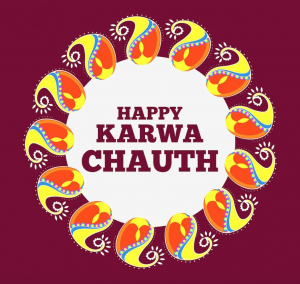 For more, check out our home page

Previous Surya Chalisa Lyrics And Video In English And Hindi

Surya Chalisa Lyrics And Video In English And Hindi

Who Was Sudama? Sudama was a childhood friend of Lord Krishna, and although he came …