Holi, the Hindu festival of colours has been growing increasingly popular amongst Asians and non-Asians alike, all around the world. But why is Holi celebrated? And how is it celebrated? 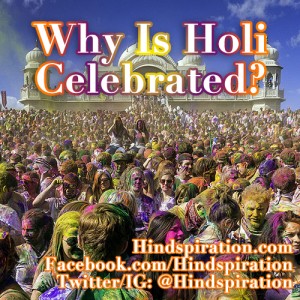 Why Holi Is Celebrated

Holi starts with a bonfire night, on the evening before Holi itself.

This goes back to the story of Vishnu’s Narasimha avatar. Narasimha appeared to kill the asura (demon) Hiranyakshipu after the demon tried to kill his own son, Prahlad, for being a Vishnu devotee.

One of the ways he tried to do this was by getting his sister, Holika, who was wearing a fireproof shawl, to sit in a bonfire with Prahlad so that he would burn. Divine influence took the shawl from Holika and placed it on Prahlad, protecting him while Holika burned and perished.

The bonfire is a reminder of good’s victory over evil and marks a celebration of the fire that saved Prahlad and burned Holika.

So Why Does Holi Involve Throwing Colours?