It is sort of true. It isn’t quite how that headline sounds, but they did have a hand in founding a Hare Krishna temple that actually happens to be, in terms of ground space, the single largest ISKCON (International Society For Krishna Consciousness) in the UK and Europe.

The Beatles And Hare Krishna

In the late 1960s, when the Beatles were at the peak of their fame, they travelled to Rishikesh in India where they met Srila Prabhupada, the founder of the Hare Krishna movement.

George Harrison in particular became very interested in Indian culture and particularly spirituality. After returning to London, within a couple of years he had developed a very close relationship with a couple of other Hare Krishna disciples who were trying to set up a Hare Krishna temple in the UK.

That Hare Krishna temple was originally founded at Bury Place in London, but by 1972 was proving way too small given the rapid growth of the Hare Krishna movement.

In 1973, George Harrison donated the country mansion, at the time called Piggott’s Manor, to the Kare Krishna movement to convert into a large temple. Up to 1972, it has actually been used as a nurses’ training college.

And it was renamed Bhaktivedanta Manor and opened in the latter part of the same year.

When Bhaktivedanta Manor was donated, Srila Prabhupada said of George, “Because he has given shelter to Krishna by providing this temple, Krishna will surely provide shelter for him.”

In the early 1990s, the local council was campaigning for the temple to be closed due to traffic and congestion and the potential for environmental damage. This closure was strongly resisted by bhaktis and gained huge support, including from George Harrison himself. This also included a well-known protest involving 36,000 people and the temple remained open.

Today, the temple is still up and running and has huge festivals around Janamashtami, Diwali, Holi, Dusshera and Ramnavami. The temple attracts several hundred thousand visitors a year. 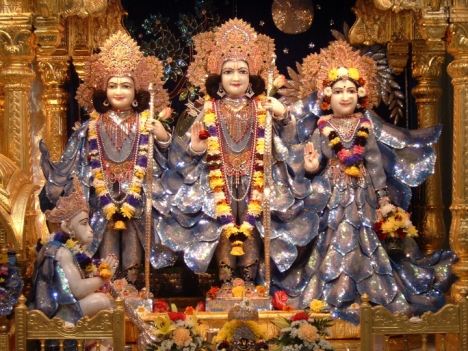