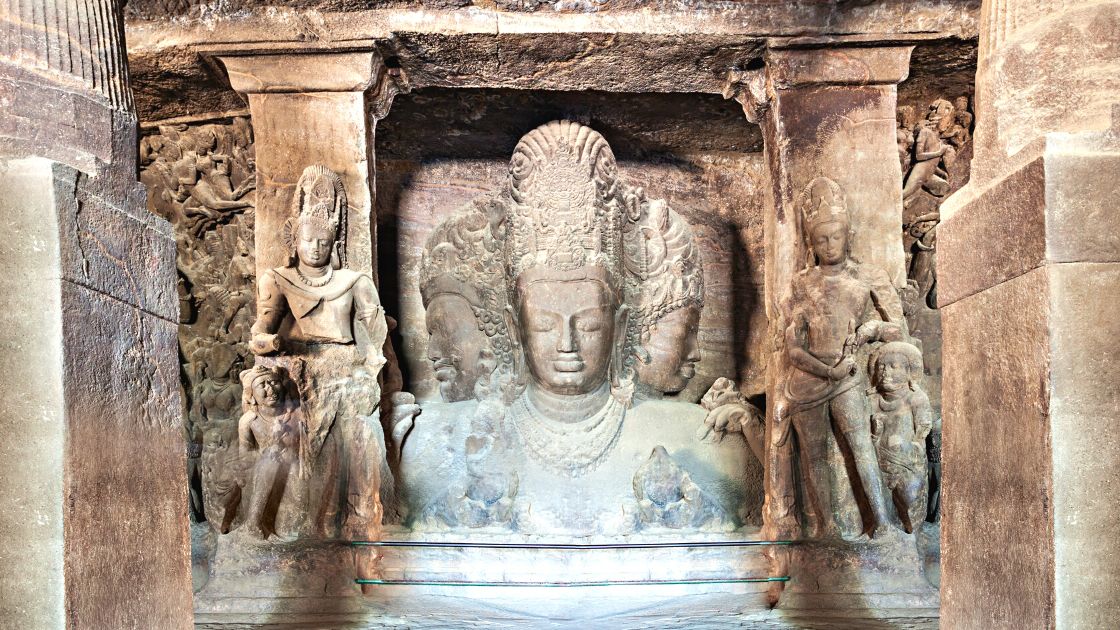 In Mumbai harbour, there is an island called Gharapuri (which translates as the city of caves) that houses ancient temples dating back to some point between the 5th and 8th century BC.

It is more commonly known as Elephanta Island. The island was called Gharapuri and was an important Hindu place of worship until the Portuguese rule of Mumbai began in 1534. They named the island Elephanta for the large stone basalt elephant statue that greeted them on arrival at the island.

This stone elephant is now on display at the Bhau Daji Lad Museum in Mumbai.

The island has 2 groups of caves – a large group of 5 caves consisting of Hindu sculptures, and a smaller pair of caves known for its Buddhist structures.

Most of the caves were badly damaged during Portuguese rule. It is thought they used the caves for target practice, but the best preserved is the main cave chamber in the Hindu group of caves.

The main cave consists of a central shine which has a Linga in the centre and entrances on four sides. This sits in the central area of the main cave.

The rest of the main cave consists of intricate carvings of Lord Shiva in various well-known forms, including as Nataraja, in Trimurti (with Brahma and Vishnu), the wedding of Shiva and Parvati and Raavan lifting Mount Kailash.

The Elephanta Caves underwent huge amounts of renovation work in the 1970s and in 1987 they were declared a UNESCO World Heritage site for their vast historical value and technical marvel.

It is widely debated who exactly was responsible for the creation and carving of these caves. There are no inscriptions available and some believe any evidence was destroyed by the Portuguese. So the true exact origins of the caves may always remain something of a mystery.

Have a look at this video walkthrough of the Elephanta caves see what you think about this ancient wonder!

Why Is Krishna Blue? »